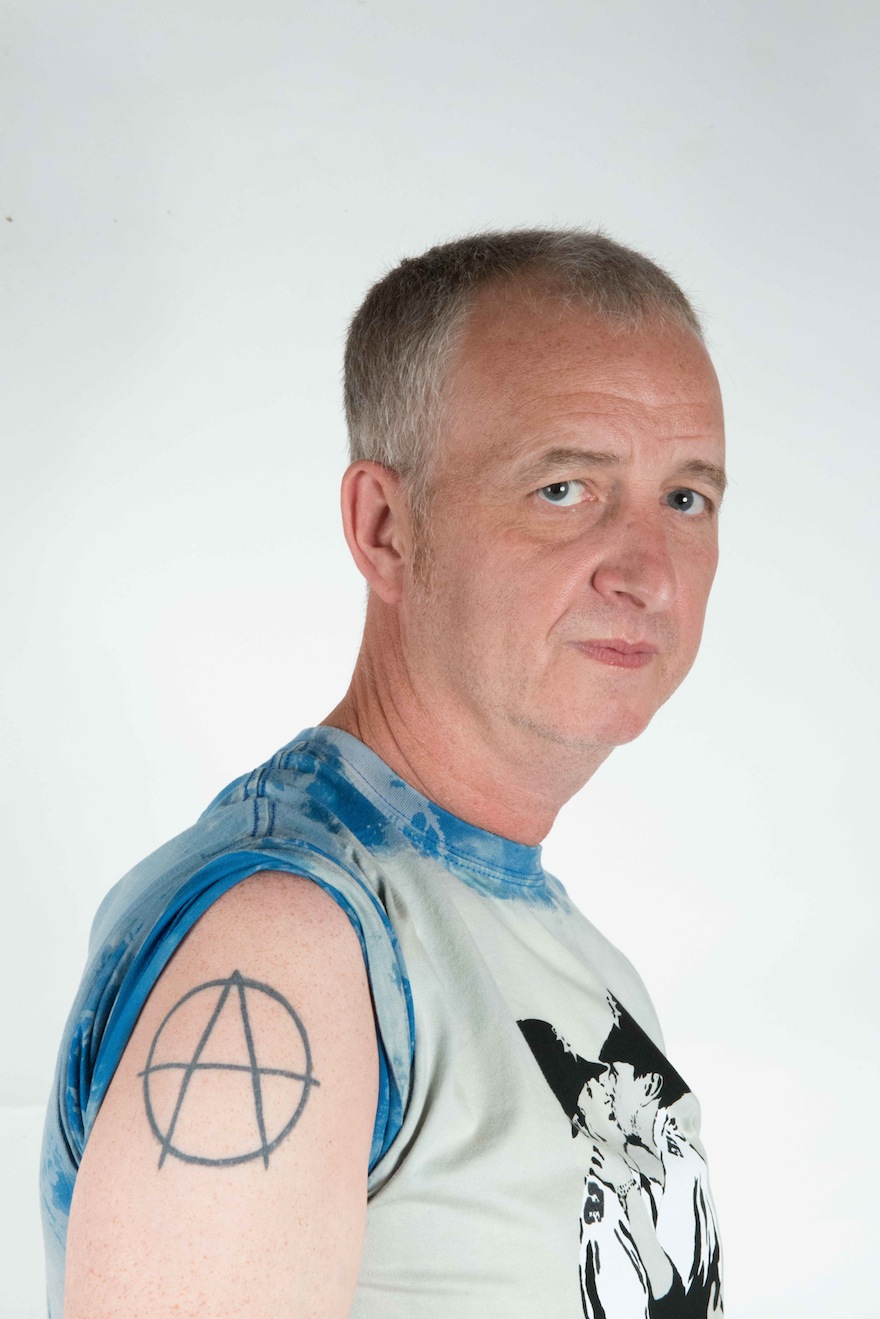 Next day I went in wearing the Luftwaffe jacket.

The tattoo might have been part of the reason I got expelled from school. An anarchy symbol on my right shoulder. A mate drew the circle with a cup, used a ruler to draw the straight lines of the A, filled the whole thing in with Indian Ink and a pair of compasses, and Bob’s yer uncle, my first tattoo. I was fourteen.

I’d got into punk a year or two earlier, when my brother bought Anarchy in the UK. I loved it more than he did, I think. The Pistols were brilliant, like nothing I’d heard before. I wanted to be a punk too! The first thing I did was draw a swastika over the badge on the blazer of my school uniform. Now, when I look back, I cringe. But back then, I didn’t know what it was, I just knew Sid Vicious wore a swastika t-shirt and I was copying that. Then I got some Doc Marten boots. Then the trousers started getting a bit higher up the leg. Shorter, shorter, shorter. School weren’t happy.

Then I started going to gigs. Myself and a kid called Steve Evans went to see Generation X in Wolverhampton. We were maybe thirteen years old, and the bouncers wouldn’t let us in, so we went round and climbed through a window at the back. Who pulled us in through the window? Billy Idol. I couldn’t believe it. This was brilliant! We went through to the gig, saw one song, and a bouncer clocked us and chucked us out. We were back at school next day, in our punk gear, telling everyone we’d met Billy Idol, with teachers telling us to go home and get changed. We wouldn’t. School weren’t happy about that, either.

The final straw was when I turned up wearing a Luftwaffe jacket I’d bought from the Army & Navy. School told me to take it off, I refused, they accused me of being racist – even though my mates were telling the teachers I wasn’t – and my mom and dad got called in to see the head. They were told If Wayne comes back to school in any punk outfit whatsoever, that’s it, he’s out.

Next day I went in wearing the Luftwaffe jacket, nothing underneath. No shirt. A big pair of jackboots, and a pair of shorts. That was it. I was expelled. I was fourteen years old, and I was semi-illiterate, and I didn’t care. After a bit I got a job on a milk round to get a bit of money, then I worked at my dad’s, labouring. I wasn’t doing much, but there wasn’t much to do, to be fair. Then when I was sixteen I went and got a job up in Bloxwich.   That’s where I met a few of the other punks from Frank F. They’d go to the chip shop at lunchtime, and I went there too. I couldn’t believe what I saw. They were still at school, and this lad Kaita had huge bleached-blonde spiky hair. Massive. I hadn’t done anything half as mad as that, and I’d got expelled. My hair wasn’t even dyed.

We started knocking around together. Walsall was all right for punks. If you wanted bondage trousers, you had to go to Oasis in Birmingham for them, and Reddington’s Rare Records in Brum had more choice of albums than Sundown in Walsall, but other than that we’d hang out down the Trough, which was great, or a tribe of us would go back to Kaita’s house – his poor mom and dad – and blast out Discharge for the afternoon. All of us smoking, nicking his dad’s wine, that kind of thing.

Nothing else mattered except punk. Gigs, gigs, gigs. As many as I could do. I remember walking back from Brum on a Wednesday night, a Thursday night, whatever. Getting the all-night bus to Perry Barr or the Scott Arms and then walking back from there. Sometimes there’d be twenty or thirty of us. Ginger Cliff in his tartan suit. A massive ginger hair perm and a tartan suit. He was the dog’s, he really was.

Just being a punk made you a target. I’ve got a scar over my left eye from when someone attacked me. I’ve had someone pull up in a car to ask directions, and stub a cigarette lighter out on my face. Another time I got hit over the head with a piece of wood with a nail in it and had to go to A&E so they could prise the nail out of my head. That was just a random attack. For a while, I carried a knife, because I was petrified walking home at night. I loved the gigs, and I didn’t want to give them up, so I just thought I’ll carry a knife. And I did. Never used it. Never even pulled it out. But things were that bad.

I’ve so many great memories, though. Seeing The Ruts when I was thirteen. Or three of us hitching to Blackpool to see GBH, and getting a lift in the back of a lorry which transported pigs. Two punks and a skinhead going up the M6 standing in pig shit, trying to breathe through the little vents in the side of the truck. Or buying t-shirts off the market and writing things on them. I wore one for about a year which just said I like flowers.