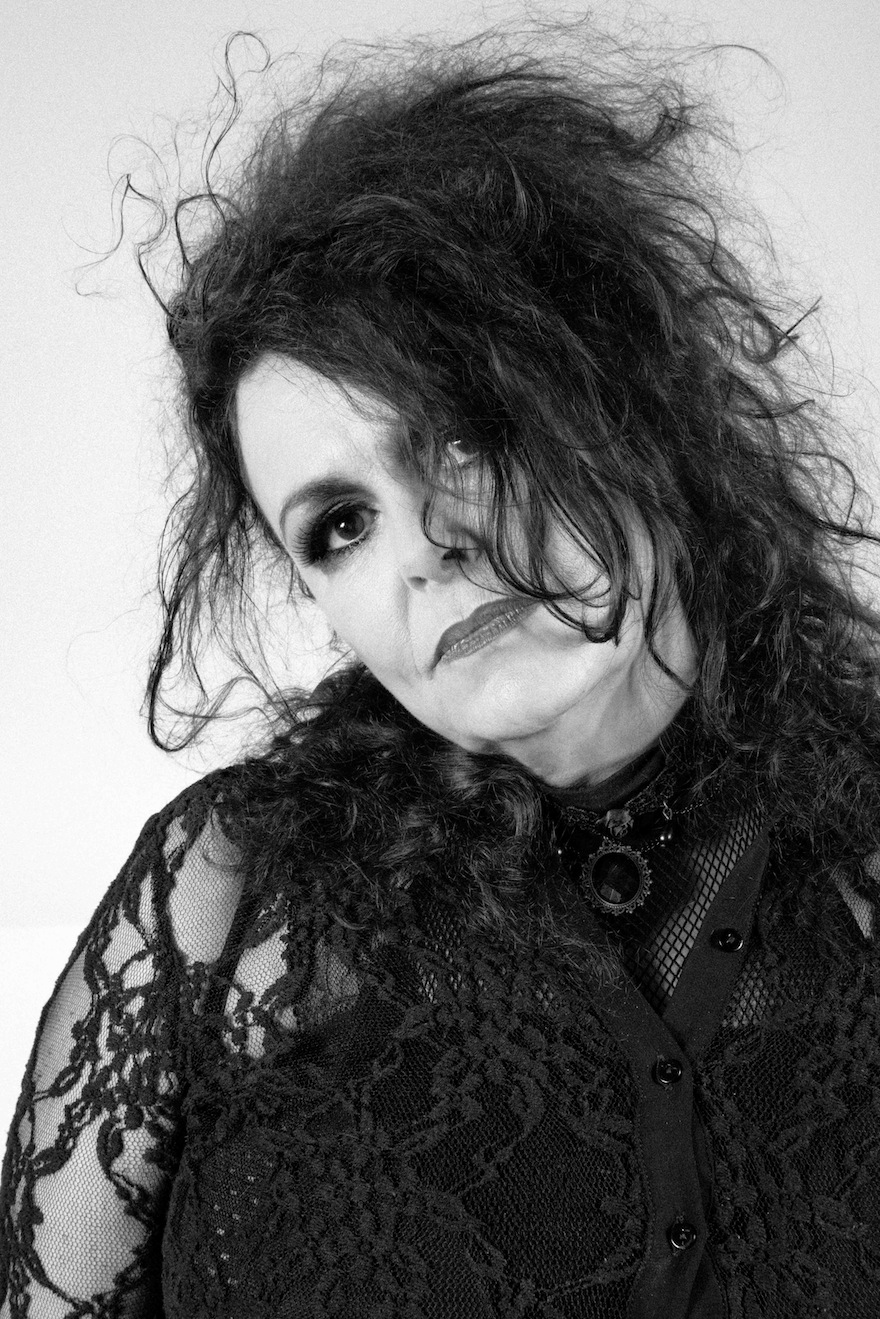 It changed my life. It’s made me who I am.

I was living in Chasetown, working, and training to be a hairdresser. On Sunday I used to get dressed up and go to the disco. Everything in place. Perfect, perfect, perfect. Then my best friend Sally became a punk, and I got into it too. I stepped outside of being this well-behaved, good Catholic girl, and found my own self. I wore jeans and t-shirt. I could swear and no-one minded, which was fab. I could smoke cigarettes, which was really fun, and I was part of a gang. There was no boy/girl barrier, we were all equal together, and it was really exciting and new.

When I was sixteen, I moved to Walsall, and we formed The Sears. I got into Crass, and started to take all this political anarchist love-and-peace hippy stuff on board. We practised in Nick Jardine’s council house attic. His mom was ever so good, bless her. We’d be up in the attic in this council house, with the drummer playing a set of plastic bins, Nick playing an acoustic guitar with bass strings in, and me singing. That’s how it started.

We got equipment, and a small PA, and our first gig was in a youth club in Wednesbury, and bit by bit we improved. We practised every week. We started gigging up and down the country. Conflict offered us a single. The Subhumans offered us an album. It turned out to be a mini-album, but we went down to Southern Studios in London, which was a great experience, and recorded it.

I was the driving force of the politics in the band. I wrote most of the lyrics. A couple were given me by friends – one song on the album had lyrics from Annette the poet – but I was the driving force. I’d answer thousands of letters in my spare time, not fan mail, more political mail What do you believe? And I wrote a fanzine as well, called Hangups.

We didn’t get paid very much for the gigs. We were always sleeping on somebody’s floor. Every night. We never had a bed. All four of us on the floor. That was just normal. It was hard work, and we had all these letters to write as well. Dear Corny, what do you think about the Irish problem? What do you think about this that and the other? And I took the responsibility to answer each and every one of them.

I passionately believed in what I was singing about, passionately believed in the cause, passionately believed that it was going to be love and peace and all this business. Anti-war, anti-everything. By this time I was wearing black and doing all the things I was supposed to do. Wearing black. Being vegan. Not saying this, not saying that. I joined punk to be free of rules and restrictions, of being told what I should wear, how I should look, how I should behave as a girl, and by the end I felt like I was abiding by another set of rules. So one day we had this ridiculous argument – and I was wrong, I admit that now –   and split, over a stupid argument.

I did actually suffer when the band split up. I didn’t really know what I was doing. That whole early part of my life was driven by changing the world. I was preaching a message and I really believed in it. I still do. I’m still very political. I’m still very opinionated. But after The Sears, my whole world, my meaning, which I believed in passionately, had gone. It took a while to get over that.

When I joined other bands, I found out I didn’t know how to sing. I was just shouting. My style was copied from Siouxsie and Eve Libertine and Pauline Murray. I thought I was a great singer but I wasn’t actually that good at all. I had to learn how to sing properly. For quite some time now, I’ve been singing jazz. I never thought I could, but I have. Music is still an important part of my life. It always will be.

Over the years I’ve been in a Janis Joplin tribute band, in a soul band, in a band called Barbie Troll which was a great band – playing garage, early 60s music – and recorded some really good stuff. And there was Bo Peep and The Exploding Sheep, an all-female band from Walsall. Me and Annette and a female drummer called Stella. Me and Annette learning our instruments as we went along. That was about two years after the Sears split up. We weren’t very political, a bit tongue-in cheek, but I just wanted to keep away from that four-piece, three blokes with a woman format. You know when you’ve been in a long-term relationship and it breaks up and you just want something different? It was like that.

What would have happened without punk? It’s a bit of a Sliding Doors question, isn’t it? I do know I’ve still got that passion inside of me to change the world, and I still have that passion inside of me to do things. And yes, there were times when I’ve looked back and thought maybe I should have done something else instead, but it was such a massive part of who I was, of growing and developing as a person. It changed my life. It’s made me who I am.