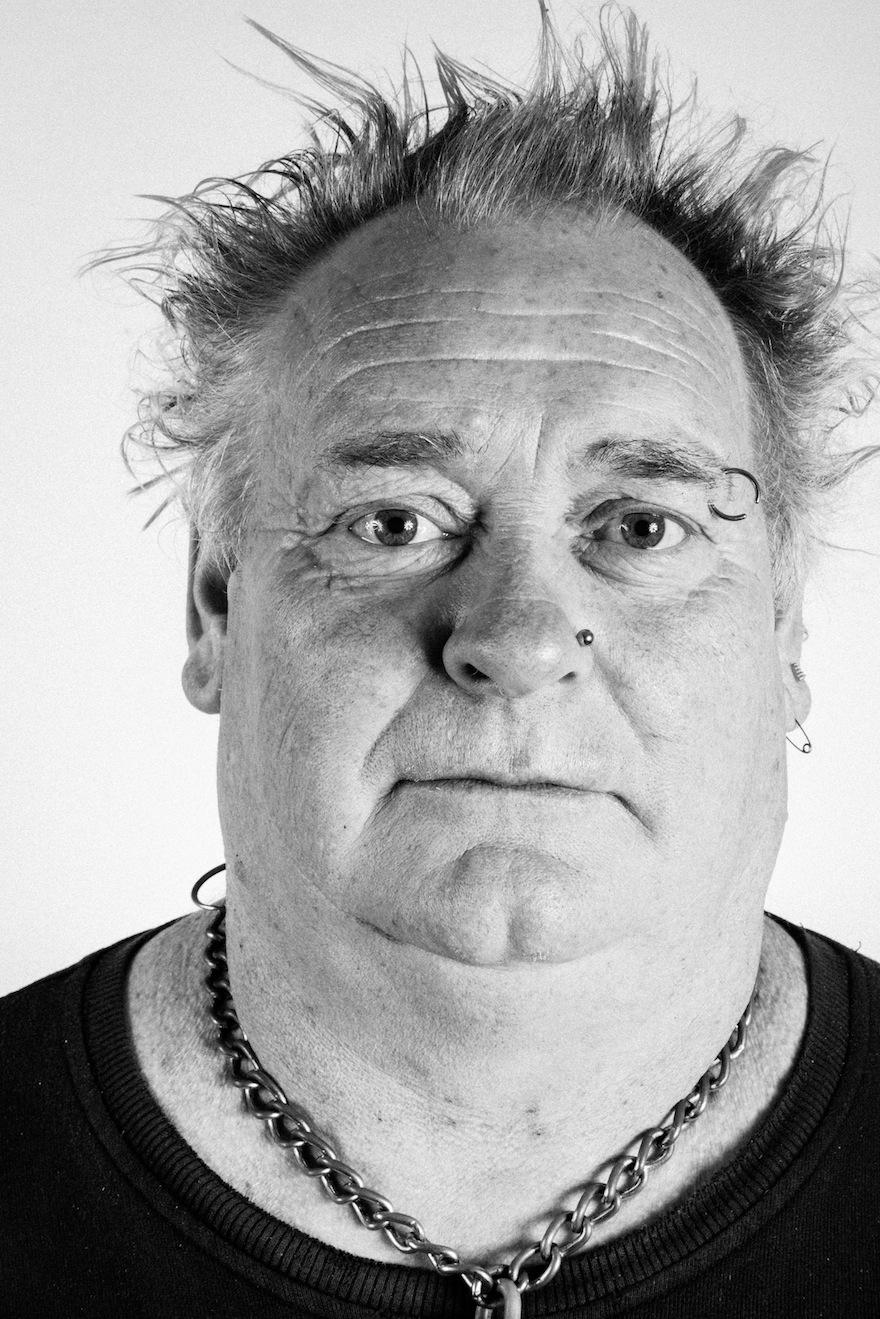 My life is held together by safety pins.

I got into punk in the late ’70s. I couldn’t stand the music there was at the time, and then one day I heard the Sex Pistols. And I thought That’s so bad I love it! I was still at school, up in Little Bloxwich, and I bought Pretty Vacant, took it home and played it and my mom went Get it off! That’s bloody rubbish! Which made it even better....

In Walsall there were a couple of record shops you could get decent stuff from: Sundown on Bridge St, and another one up where Wilkos is now, in the arcade. Other than that, there wasn’t much. If you wanted decent clothing you had to go to Brum. I got a leather jacket and some bondage trousers I paid a fortune for in Oasis, and that was enough to mean you got some looks, and abuse out of cars, and people wanting to beat you up because you looked a bit different.

When I used to go to gigs in Digbeth Civic back in the day, there’d always be people waiting for you at the other end, looking for a fight. That was how it was. But on the train in there’d always be someone touching up the spikes in their hair with the British Rail carbolic soap, getting it just right. You’d get off the other end and there’d be people wanting to fight you, but at least you looked proper.

Then you’d have the coppers banging on the vans with their truncheons, trying to get a response, just so they could steam in. Sometimes, just getting to a gig in Digbeth and surviving it was a big deal. Now it’s a breath of fresh air, but back then it was ridiculously territorial. And it wasn’t just people wanting fights who had a go at you. I remember walking through Walsall one time and there were religious people giving out leaflets, They said Look at that! The devil’s pollution! That was the sort of thing you used to get. People judging us.

I still go to two or three gigs a week, by public transport, so it takes a while. At the end of the night, if I’m coming back from Brum, there’s one bus which leaves there at midnight and goes all round all over Barr Beacon, through Pheasey, and round to Rushall. I get off there and I’ve a two-mile walk home. If I don’t get off there, if I’ve fallen asleep and wake up when the bus gets to Walsall, it’s a four-mile walk. But it’s worth it. I’ve seen every band I ever wanted to see. Except the Clash. By the time I appreciated them, it was too late.

Every August, I go to Blackpool, for Rebellion festival. I go up without a ticket, and I always manage to get in somehow. I’ve been out of work a couple of years, and I can’t afford a ticket, so I try and get one cheap outside, and it usually works. If I don’t get in, I don’t get in. This year I was sat down outside a pub and someone came up and asked if I wanted a ticket. How much? £50. Thank you, sir. It’s that punk family thing, isn’t it?

Nowadays, gigs police themselves, and it’s all friendly. In Blackpool we go back to the same B&B every year, because they love having us there. They tell us You punks are no trouble. It’s the young farmers we can’t stand, because they trash the joint, and the punks don’t. And the street drinkers love having us up there too, because the police don’t bother hassling them when the punks are in town, and it’s the one time they can have a drink in peace.

The people in punk are so like-minded, that’s what I love about it. The people. I’m 53 years old, and I still love punk rock.

My life is held together by safety pins.

And that’s the truth.