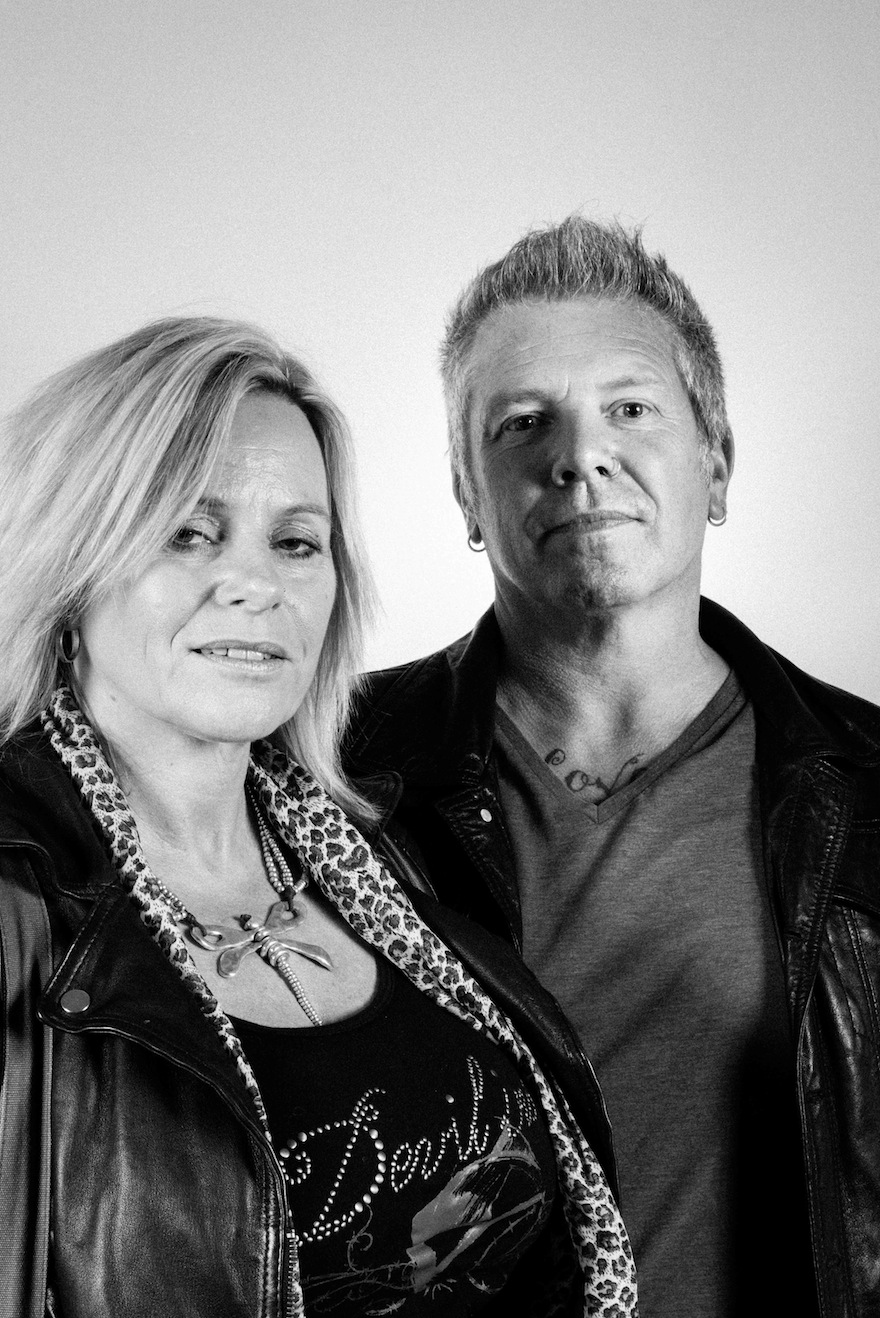 We’ve been together 33 years.

Kaita: I still class myself as a punk. And I think I always will be. It’s the attitude to people and to life. Everyone looked at punks and thought they were a bit aggressive, but I believe punks care about people, about life in general, about the environment and social issues, and that’s what’s good about it.

I was told by a lot of people when I was about fifteen/ sixteen that I wouldn’t amount to anything and how we would grow out of it in five years’ time, get married and have kids. People wanted you to fail!  Yes, there were people who were into it for fashion, who’d spike their hair up one day, but go out with their football mates another day and dress like them, and yes there were people who thought that as soon as you got a mortgage or had a kid you couldn’t be a punk any more, that you had to be Mr Sensible. But those things don’t have to change you. Not if you don’t want them to.

Back in the day, I was able to go to school dressed as a proper punk, with big blonde spiky hair, because in my second year they trialled a policy of no school uniform. We really pushed the limits. You got punks, rockers, skinheads, mods, whatever. It was a brilliant scene, but sometimes you couldn’t even get off the bus in Walsall without being attacked. You ran the gauntlet going up to the Trough. Once you got in there, that was your safe haven, in there with like-minded people.

I learned to play bass, because Birchy played bass. He joined a band, and I looked at how cool that was and thought Right, who’s going to be in a band with me? I met Tat and Coynie at Bloxwich Baths, and we formed Out Of Order, and practised in my mom’s kitchen. Mom loved that, she absolutely loved it. We used to practice whenever we could, and she’d walk through to make a cup of tea while we were making a racket and walk back through going Sounding a bit better this time, lads!

In our minds, this was just the start. We were brilliant. We were going big time. That’s what punk did – it allowed people to go out and have a go themselves. It’s the old cliche: if they can do it, we can do it. None of us had music lessons. You put a record on and played along to it, and learned that way. When we wrote our first song we thought We can do this! It was called Mental Chaos. We still do it now, and we’ve just recorded it again. It sounds better now, because now we can actually play. I’m still in the band, still doing it.

If I hadn’t got into punk, I wouldn’t have met Mandie. It was 17th August, 1983. Wolverhampton, Queens Hotel, Subhumans gig. I was handing out flyers for an Out of Order gig, and there she was. I used the classic chat-up line any punk would do. Have you got 10p to lend me? because it was all I could think of saying. And I needed 10p for a drink. We’ve been together 33 years now. Back then I’d left school and was on a YTS earning £27.50 a week, and she was in sixth form, and I took her out every Friday night. I’ve never got the 10p off her, mind.

All these years on, and I don’t judge people by how much they own, I judge them for who they are, what they’re like. I go to a gig and there’s a bunch of people there, and we have a connection, and the same sense of humour. And that’s down to punk. It’s a big family.

Punk gave people that belief they could do something. So we did.

Mandie: When I was sixteen I went to this Subhumans gig in Wolverhampton. It was the first time I’d been exposed to the more anarchic side of punk. In the mid-80s you didn’t have the internet where you could access anything at the click of a mouse. Until I started going to gigs the only way I heard new music was on the radio, and then I’d get my cassette player and press record to catch the song before somebody spoke over it. But I went to that gig, and met Kaita. We’re still together 33 years on. He gave me cassettes of bands like Crass, Zounds, Ruts, Discharge, and GBH.s

Before then, I’d been into Killing Joke, and Siouxsie (she was a bit of a hero of mine), and when I went to see Japan and wanted an outfit, I went to Martin Degville’s shop round the side of the picture house in the centre of Walsall, where he made these clothes that were really really expensive and a bit bonkers. So I dragged my poor mother along and my friend bought a bondage style dress and I bought a dress with a big stiff collar and loads of lace. At the time it was the most expensive thing I’d ever bought.

I’d go up Walsall market and the second-hand shops, because I made all my own clothes. You could make an outfit for a pound. I’d get a piece of material, borrow my mom’s sewing machine, and learn to make leggings, skirts, tops, and dresses. Or you’d bling up old clothes. Buy an old waistcoat, stick a bit of lace on and a couple of badges, change the buttons, and you’d have your outfit. I wanted to look different, but I didn’t want to spend money. Well, I couldn’t, because I had none. I was in the sixth form, and had £5 pocket money. Kaita was on a YTS, earning £27.50 a week. We did everything on that. Went out, bought clothes, drank cheap cider on a Friday evening. We walked everywhere.

Our social life was seeing bands. We used to go everywhere in the back of Tat’s old Transit, up and down the country when we were sixteen, seventeen. It’s why we never tell our kids off, because we know we’ve probably done ten times worse. We went to Manchester, Leeds. We broke down on the motorway. We got home at all hours. The police pulled us over once and the copper shone his torch in the back of the van. There was about fifteen bodies in there. He just shook his head and said Carry on. Wouldn’t entertain opening the back doors. We’d get home at whatever time in the morning, and I’d get up and go to school. Try and flatten my hair down a bit. Just a touch.

There were Out Of Order gigs, too, of course. I remember one gig they did where Coyney smashed the light. They were halfway through a song and he leapt off the stage and headbutted the light-bulb. It smashed and the place went into darkness, because this was the only bulb in the room. The band stopped playing, and we all just sat there. Couldn’t see a thing. It was hilarious.

My memory of those times? There was never a lot of money around, but you made your own fun out of that. You didn’t need a lot of cash to enjoy yourself. You’d record albums onto cassettes and share them round because you couldn’t afford to buy the album, and that was how you heard new music, and played it in your room before you went out. And the Trough was a centre for meeting people. You couldn’t ring them or text them, because there were no mobile phones, but everybody knew where to meet. Friday night, it was the Trough. Pitch-black in the back room, with loads of rock and punk music... we had great fun.