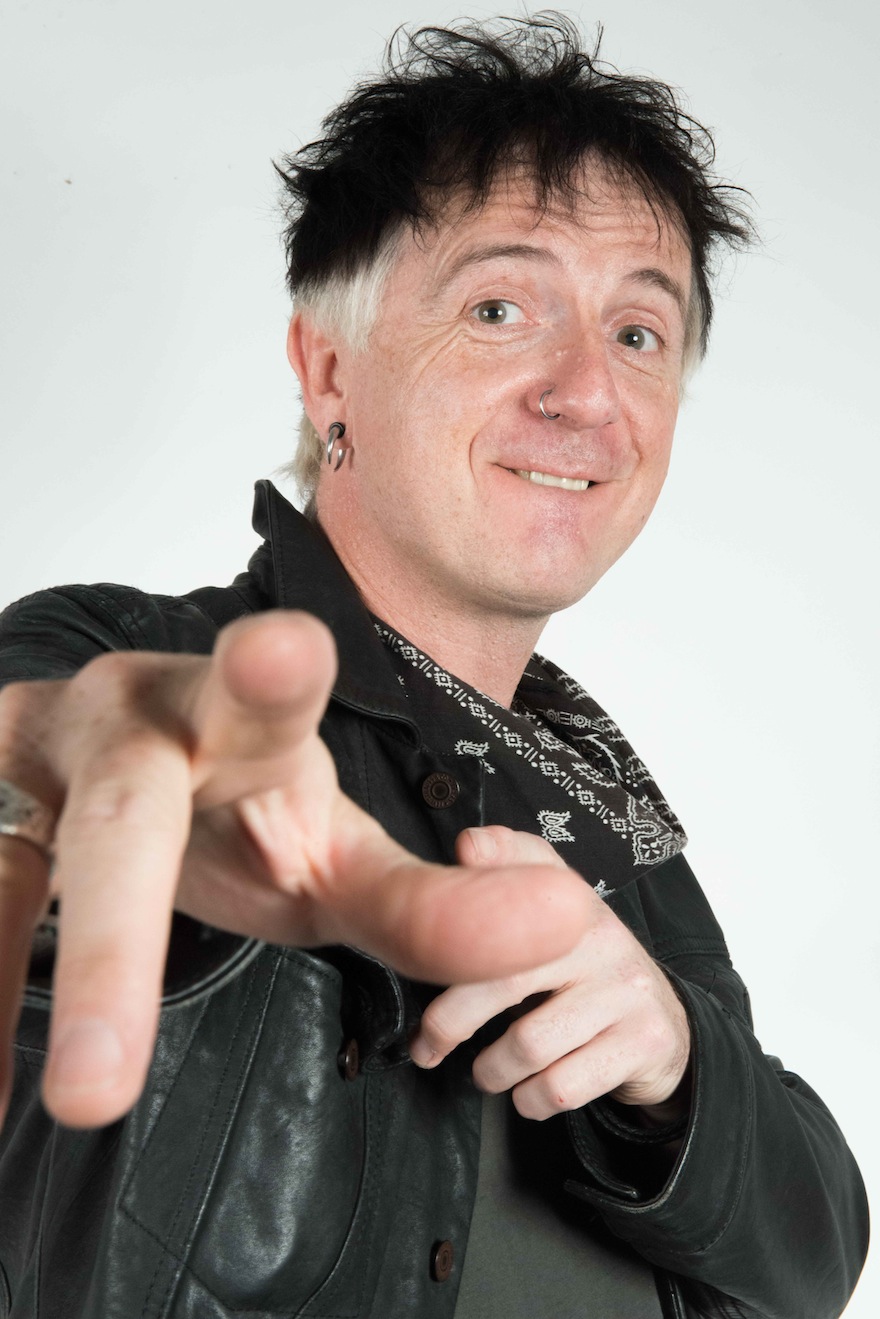 This is a lifetime thing.

Punk taught me really early on to accept everybody, and never to judge anyone on race, sexuality, or whatever. I’d been into rock – the first band I ever went to see was Motörhead in Wolverhampton – but there wasn’t that big a leap between that kind of rock and punk, and I slipped into punk, and it suited me better. I got into it literally as I was leaving school, and I started going down the Trough because that was where all the punks used to drink.

About that time, Martin Degville (who’d later be in Sigue Sigue Sputnik) used to live up at the top of the markets in Walsall opposite where the supermarket is now. There was four or five people living together in one house, mainly gay guys, and I had the utmost respect for them, because Martin used to walk round Walsall market with bright red hair, striped skin-tight leggings, and five-inch stilettos! In Walsall market. Back then. That was outrageous. Having your ears pierced and your hair bleached, like I did, in comparison that wasn’t so bad. What Martin was doing was the benchmark. So like I say, early on that taught me not to judge.

I lived in Chuckery, just over the road from the Trough, and I’d go there with my best mate Cliff Brown – he got stabbed at the Walsall Town Hall gig where Black Flag didn’t turn up till after the show was over and I had a drunken argument with Henry Rollins, but that’s a different story. Me and Cliff used to hang about together, because he lived in Caldmore and was probably the nearest punk rocker to where I lived, and we both went to the same school and were the same age. At the Trough, we’d meet other punks, and the slightly older kids who were into punk, like Pete Hope. That pub was definitely the centre of the punk scene in Walsall.
I was seventeen or eighteen before I started playing anything. I started on bass. It’s the obvious one. It’s only got four strings, so it’s got to be easier, right? What we did never amounted to anything. We used to go to an old school in Wednesbury where Slade were supposed to have practised back in the day, as if that meant some of the magic was still there. We’d make a noise, bash things, have a few beers. It was a social thing as much as anything.

Then a guy I was working with had a guitar for sale, so I bought it off him. Carried on making a noise, having a few beers, doing little bits of nothing. I never gigged properly till I was about twenty, and even then I was just doing little nothing gigs, finding my feet. My first big gig was a few years later, with a band called Fragile Display, and it was in the Mere, which was at Stourbridge Arts College. We sold a lot of tickets, and we made a lot of money. 1983, and we made £500 on out first gig! I thought This is for me!! I never considered this might be because the gig was subsidised, and we hadn’t had to deal with most of the costs. I don’t think I ever made that amount of money for a gig again, or at least not for a good few years....

I still play guitar in a band. It gets me out of the house. I’ve never walked away, never got a proper job. I’ve always loved music. When I was twenty-three I had, not quite a couple of years off, but I wasn’t going to so many gigs, I wasn’t playing guitar as much. I had a girlfriend, music took a back seat. I think that happens to a lot of people, they get to that age, they get a house, get married, have a proper job, all that. Music goes onto the back burner. But with me it never did, not really. Music. Always. I love playing. I love new music. Fresh music. There’s great new bands, you know.

Music has always come first. I’ve always been friends with other people who love music as well, and it’s good to be around that. The social thing is important, for sure. And on the punk rock circuit, everybody’s watching everybody’s back, people do the best for you, and people put on gigs for the love of it, for the music.

I’d have grown up by now if I was going to grow up. This is a lifetime thing. Some people say I was a punk rocker from 79-83 and then I stopped, but I still classify myself as a punk rocker, and I always will.

It set me up for life.