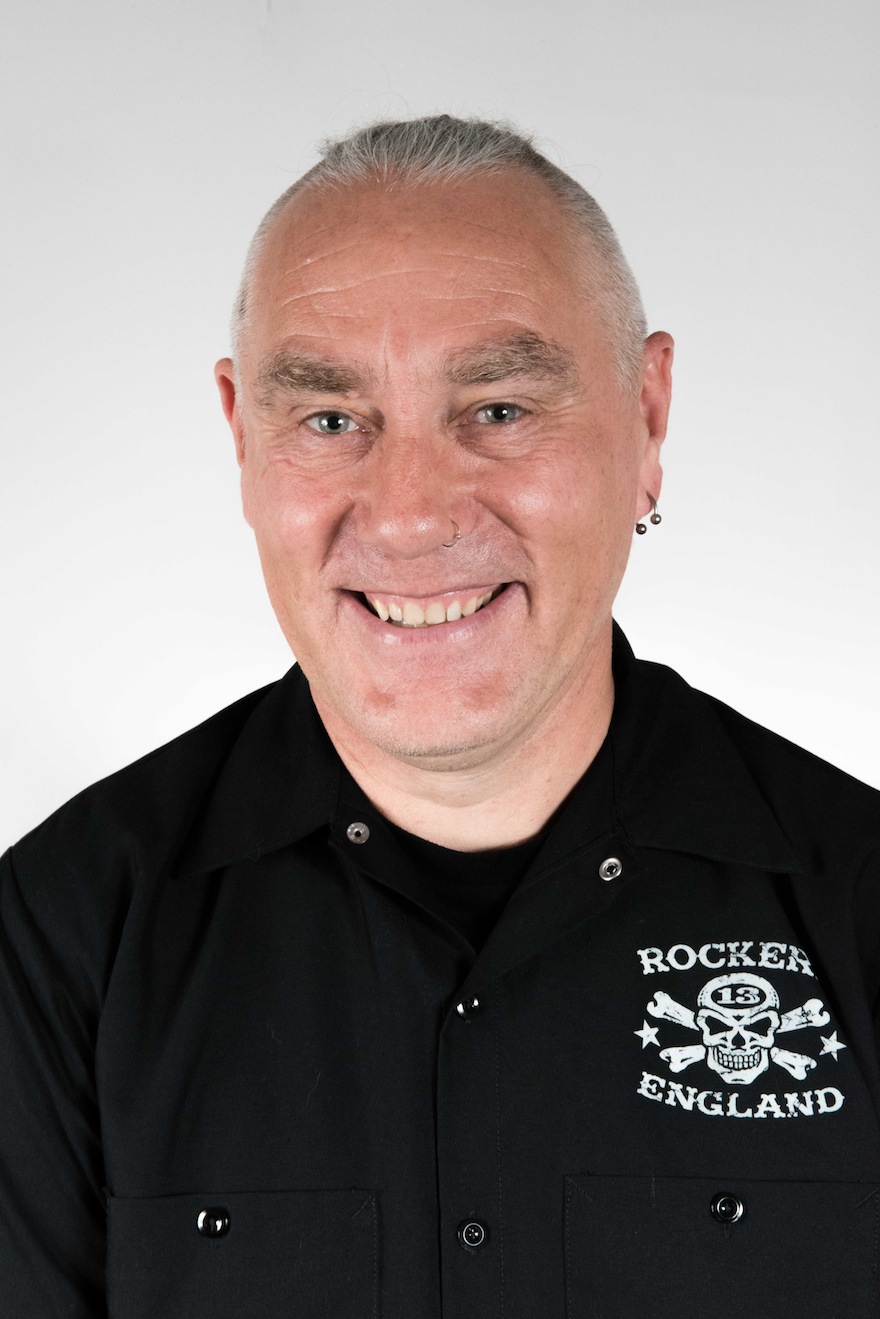 It all started down the youth club.

I was sixteen when I got into punk. A mate of mine started going out with a girl and she played us Inflammable Material, the Stiff Little Fingers album. I went What the hell is this??!! It opened my eyes, took the blinkers off, and expanded my world.

Then I started going to discos at the local youth club. You could take your own records. There’d be some crap record player in the corner, and you’d play your songs and other people would play theirs, and sometimes that’d turn you on to new stuff, and sometimes it wouldn’t. They might play three or four different punk tracks, so another night you’d go to another place and they’d do the same thing. I don’t think youth clubs even exist now, but back then they did. There were gigs in schools, too. I remember going into TP Riley to see the Au Pairs, with Delta 5 and The Sears.

I moved out of home, because I didn’t get on with my step-dad, and I moved in with my dad instead. I was eighteen. I was angry. I had a mohican. One day I got up, and decided I needed a haircut. My dad said Don’t get a mohican! If you get a mohican again, don’t bother coming back, you’re out. What’s the worst thing you can say to an eighteen-year-old with an attitude? I went straight down the barbers and got a mohican. I ended up sleeping on people’s floors for a while after that!

One of the gigs I really remember was the Angelic Upstarts at Walsall Town Hall. Thirty people all waiting at the bus stop outside The Anchor in Brownhills. We’d been in the Anchor beforehand. I knew that if there was more than about six of us waiting at the bus stop, looking like we did with leather jackets and that, the bus just wouldn’t stop. It’d go right on past. This copper was walking by. I grabbed him and said Is there any chance you could come on the bus with us? And he did. He came on the bus with us for one stop, to reassure the bus driver it’d be OK. So fair play to him. Although he probably also figured that if we were going in to Walsall for a gig we’d be on someone else’s patch if there was any trouble!

If we went to see bands in Birmingham, we’d get the bus in, watch the gig, and then have to walk home because the buses were done for the night. One time we went to see the Cockney Rejects at the Cedar Club, and it was just one big fight. They call it the Battle of Birmingham. It was carnage, absolute carnage. When we came out of the gig, the coppers were whaling everyone, whether you were doing anything or not, just to be sure. And then we had to walk home, all the way to Brownhills. Or at least some of the lads did. Five of us got as far as the Barton Arms in Newtown, went in a block of flats, walked up to the top floor and slept on the landing till the buses started running in the morning. The ones who walked back the whole way, they beat us by maybe an hour.

Last year, at Rebellion Festival, a mate said Let’s go and see The Pukes. They play ukuleles. I knew nothing about them. I walked in, they were playing California Über Alles, and there were twenty-three people on stage. All playing ukuleles. I thought That’s the best thing I’ve ever seen in my life!

I bought myself a cheap ukulele for £10, learned some chords, and started playing. It sounded OK, so I bought a decent one. Then I found a mate had a ukulele. My neighbour decided he’d get one. Then another mate who’s a drummer, he had a uke, and he joined in. We did a small gig up in Cannock, and a guy who’s a singer in a band, he was up for it, and their bass player had a double bass and he wanted in, and a couple of people in the audience went out and bought ukes, and everyone came round ours to rehearse, and it’s gone mental.

Now we’ve got a drummer, a double bass, a guy with a harmonica... We did a gig last week and there were twelve of us on stage, but there’s twenty of us in the band. We do covers of punk songs – White Riot, stuff by The Damned and so on – but we do other stuff too. We play Burning Love. And everyone’s laughing while we do it, because you can’t play a song on a ukulele and make it sound serious. We call ourselves Not Quite Dead Yet, because we’re not.

Punk gave me that sense of belonging. It still does. Some of the people I met through punk I’m still friends with now, and I will be for life, I just know it. I love going to gigs and meeting up with people I haven’t seen for god knows how long, and catching up on what they’ve been doing.

But it all started down the youth club, from that one album. Inflammable Material.