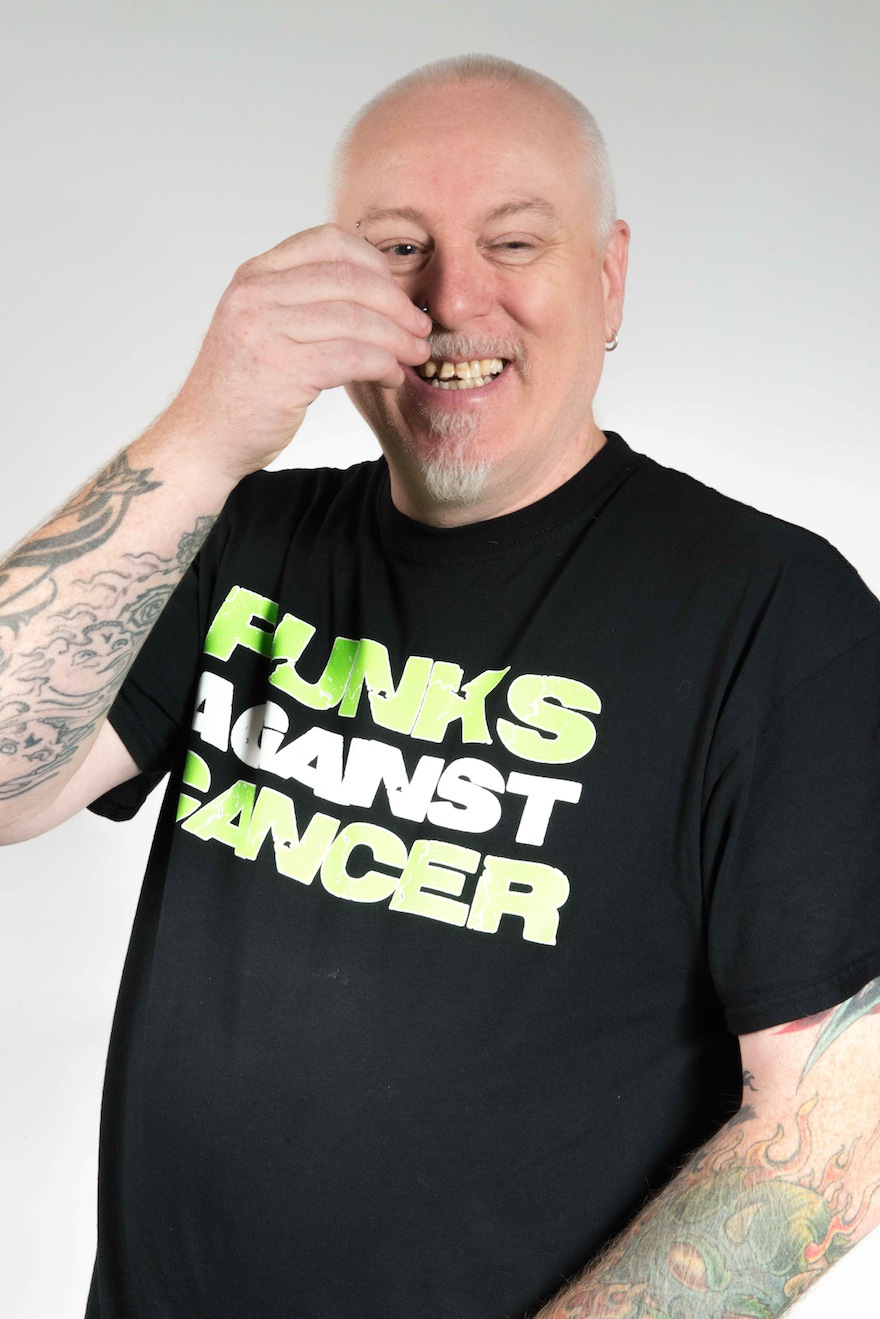 I've still got the same attitude.

A couple of years before I left school, in ’76 or ’77, a few kids started coming to class with spiky hair, and I thought What’s this all about? They told me about this new music. A lot of my other mates at the time were into Northern Soul, and there were a lot of mods, and none of that interested me, but as soon as punk came about, it seemed to fit with me. It struck me, and I liked the music. It was me then, and it is now. I don’t look as ‘punk’ I suppose, but I’ve still got the same... not anger... but I’d say the frustrations with everything that I think punk was all about in the early days. I think it’s just as prevalent today.

When I was sixteen, my dad died and we moved back to Bloxwich. And that was brilliant for me, because where I’d been there were no punks, but in Bloxwich there were loads, with spiky hair, and I was in my element. I met some lads who were in a band, and they had a drummer who was pretty crap, and they said to me If you can get a drumkit, you’re in the band. So I went out and bought an awful second-hand drumkit, and that was it, I was in! It cost me something like £60, I think, which was a fair whack of money, but my nan had left me a few quid, and I went to my mom and she gave me the cash. At the same time, because I’d always wanted to play the guitar, I bought a guitar and a little practice amp. So I joined that band, who were called The Condemned – and we were pretty awful – but while I was learning to hit the drums and play a bit, I was also sitting in my bedroom and learning to play the guitar.

Then another band, Death Rattle, asked me to drum for them, so I did that for a couple of years. And while I was still doing that, a couple of lads from Walsall asked me if I wanted to join another band and play guitar. So we started another band, Out Of Order. We used to rehearse in Kaita’s mom’s kitchen. We hadn’t got a microphone, so the vocalist sang into a set of headphones and the vocals came out of the speaker in the amp. I’ve no idea how that worked. We sounded all right, and we were pretty good, and I enjoyed it. So I sold my drum kit, and bought a bigger guitar amp, and I’ve played guitar ever since.

Now, I play in four bands. Out Of Order. Meathook with my lad Jay, who’s a drummer. Mangled, which is a good old-fashioned punk band my wife Sarah plays bass in. And finally I play bass in English Dogs. I haven’t made any money with them, but I’ve been to some nice places – Australia, America, all over Europe – and that’s great.

I don’t make a lot of money at it. Apart from really big bands, or ones with chart singles, I don’t think any punk bands have ever made much money. Generally punk is all about just doing it for doing it. From the age of twenty-one or twenty-two I’ve done nothing but work. You have to fit in doing the band, which is basically a hobby, round the work. If there was money in it, great, but it’s all about the love of doing it. If someone loves fishing, they spend their money on fishing rods. Well, I spend my spare money on guitar strings and the like.

When punk happened, it gave people something they could identify with. For me, that’s still the same. We play in bands, we go up and down the country all the time, we know people everywhere, and everyone calls it the punk family. And it is. Now, because the average age of people in the punk scene is mid-forties to fifty, because all those people have grown up to be pretty sensible people instead of snotty-nosed little so-and-sos, there’s a different attitude when you go to a gig. People are nice to you. There’s very rarely any trouble. Back in the early days there was fights all the time. Now, it’s like being in a family. You go up the other end of the country and people say Come and stop at our house and they feed you and put you up and look after you. It’s just nice. Belonging, I suppose.

Punk arrived because there was a lot of unrest and nothing for people. People were getting pissed off with having nothing. And I think today is the same. I think we’re getting back to the late ’70s again, now. Back in the day it was more the music and the scene that people got into, rather than the politics of it. I know some people did, but I was never that political. But now, I write songs, and I do it with a political edge, but subliminally rather than in putting it in your face.

It goes against the punk ideal to fit in with the system and society, but as you get older you realise you aren’t ever going to beat the system, you’ve got to work the system instead, got to roll with it. But I’ve still got the same attitude. I’m still frustrated with the world.