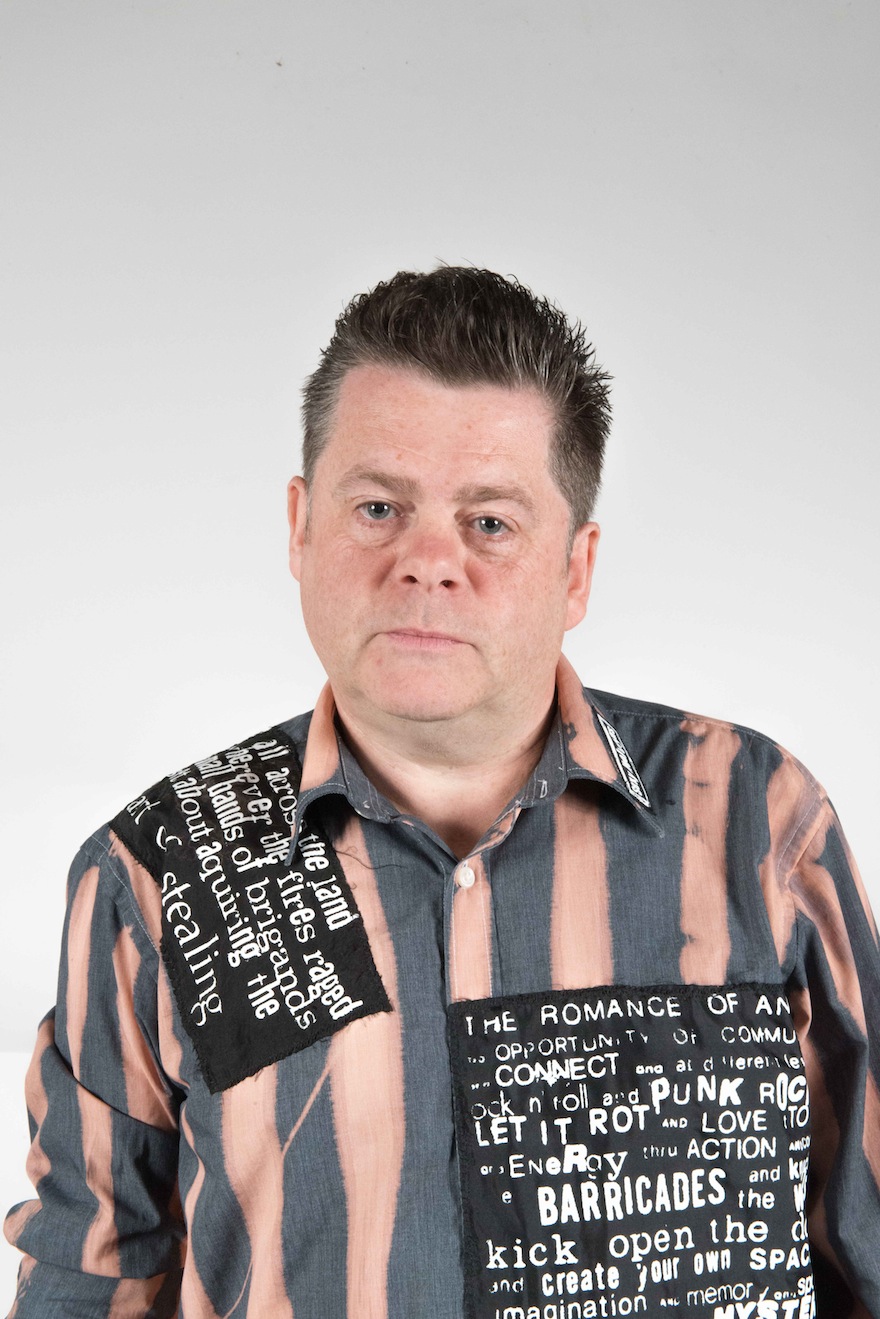 Question what you see.

I was fourteen when I got into punk. I loved the reaction that the look got. It had real shock value, and my parents hated it. And you’re going to do stuff to wind your parents up. At least I always did!

My look was ragbag. I couldn’t afford a leather jacket. I had some ordinary jeans that I took in by hand. Tight-leg jeans. I managed to persuade my mom to get me a pair of Docs. That’s how it went on. As I got a bit more money, I got t-shirts of bands. But it was the attitude more than the look. I mean, I fell into that mohican-Kings-Road look later on, I think everybody did, but to start with I was more open-minded about the music, and more open-minded about the look. I think a lot of peer pressure and media, music press or whatever, told you what you’d got to wear. I do regret that, that I didn’t keep my own path a bit more.

If I’d had £100 spare, would I have bought all the gear? Hell, yes! But I didn’t have the money. I borrowed a granny’s PVC long jacket from a friend of a friend. It came down to my knees. Leather-look, but not cut in any way that you’d call trendy, fashionable, cutting-edge. And I found some Humbrol model paint, painted Discharge on the back and put a few studs in it. I thought I was The Don! I got a couple of outings, till the girl I’d borrowed it off found out, made me take the wording off with turps and give her the jacket back! But she was also a girl who had such domineering parents that she used to put her punk stuff in bin-bags and bury it in the garden. Then, when she was going out, she’d dig it up, and get changed in a pub toilet or wherever, and come out.

The one memory I’ve got about being a punk in Walsall is running. Running from trouble. Some days I’d literally walk outside my house, the 311 bus would go past, and lads would get off the bus and chase me. If I had a week where I didn’t have to run, didn’t get chased, I’d think something was wrong.

I got very good at running. I had to. One day I ran for the bus with a mate, and he asked how I could run so fast with my little legs. I’ve had a lot of practice! I’d get off at the main bus station in Walsall, and head through town to get to the Trough. I spent most of my time running, or I’d go up the back streets, through the alleyway and up over the Market Place, just to keep out of trouble. I got chased home all the way from the Arboretum once. I wasn’t any good at running for a prize, but running to save my own skin? That was different.

It was a violent time. At the end of the day, a lot of people are looking for someone to look down on, to have go at verbally or physically. Whether it’s the fat kid, the stupid kid, or whoever. So you kind of set yourself up, being a punk. Not to be a victim, because you never thought of yourself as a victim, but as a target.

First gig I saw? The Ruts at Wolves Civic. One of the supports was Auntie Pus, a guy
with an acoustic guitar, a bit of a quiff, Buddy Holly glasses, and a high-pitched nasal voice. I don’t know what the capacity of the Civic is, but it’s big. It was a sell-out show, rammed, and everybody gobbed at him. It wasn’t like a shower, it was a downpour of green gob. And he stood there and did his set. The Ruts were delayed – one of the band had to drive up to Wolves after his wife had given birth. So Aunty Pus did an hour and a half of this. Being gobbed at, and taking the abuse. This little scrawny guy, volleys of gob and plastic glasses heading his way. I watched it, thinking This is brilliant! This is like the best pantomime I’ve ever been to!

For me, the main thing about punk is that it’s the music I love and the people I like. You can go into any venue, and people will chat to you. You can be as straight-looking as you want, and wear a band badge, and you can guarantee someone will come up and say I love them. I saw them. I haven’t heard of them. You’ll be among friends.
And more than anything, punk formed my values. Question what you see. Don’t take everything at face value. Be yourself.